This is a throwback painting from about 13 years ago of a lady in the market in Antigua, Guatemala. 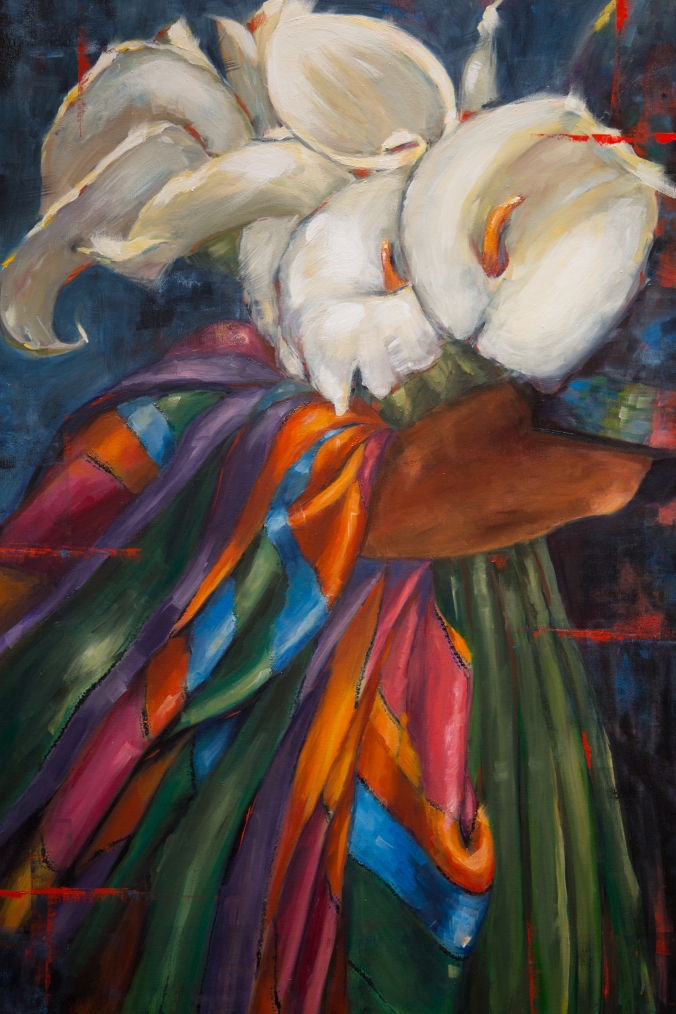 We adopted our third child from Guatemala. It was on our first trip to visit him that I saw the ladies in the markets with huge luscious Callas lilies. The indigenous people of Guatemala also weave amazingly intricate and colorful tapestries like the one this lady is holding in the painting.

The painting is named The Gift, because our son was as much of a gift as these beautiful flowers.

I was in my mid-thirties with two wonderful daughters when we started thinking about adding a third child to our family. While we tried to conceive on our own for a few months, it seemed from the beginning that God (or the universe if you are more comfortable with that notion) wanted us to adopt.

After natural conception did not work we visited a fertility doctor. This course of action seemed doomed from the beginning. It began with the first appointment; after waiting months to get into this doctor we arrived for our first appointment, only to find that the appointment had somehow been deleted. A part of me knew we should have left at this point, but instead we waited two hours and finally got to see the doctor. Our test came back pretty normal, but we opted for one round of in vitro fertilization.

The process did not work, but more importantly at the same time we started thinking about adoption. My husband “had the dream” about adopting a child from a Latin American country. I started having similar thoughts. Coincidentally or not, I met a family who adopted from Guatemala and they put us in touch with an orphanage in Antigua.

There are many more stories about the initial process, but a year later we were matched with a wonderful baby boy named Oscar from Guatemala. We had the opportunity to meet him for the first time when he was three months old. We spent a week in Antigua completely falling in love. The hardest thing I have ever done in in my life was leaving him at the orphanage while we returned home to finish up the adoption process.

Me and Oscar on our trip to Guatemala.

We came home with the hope that our new family member would be joining us in Seattle in the next month.

Then a week later the call came; the government of Guatemala changed their international adoption laws. As the lawyers explained to us, the government officials were not happy that comparatively affluent American families were adopting these poor street children. This is a government that ruled by keeping it’s poorest people oppressed. Because of this dislike, they were scrutinizing the adoptions and basically doing whatever they could to make them not happen.   (Let’s not mention that fact that 10 years later these unadopted children were fleeing to the US and some are still being held in centers just across the border).

All of our paperwork was in order; we had DNA test to show that Oscar was the physical child of the parent who was participating in an open adoption. Nevertheless, the Guatemalan government basically made up an error in our paperwork that was not repairable.

The problem was with the record of Oscar’s birth mother. In Guatemala, births are recorded in what is known as the book of births. When there is an error in the book of births, the information is supposed to be crossed out, the correction written in and then initialed. With Oscar’s mother’s record, they alleged that it looked like someone had erased some information and re-written on top of it. So the government was asking for the birth certificate from the hospital where Oscar’s mother was born. Of course, she did not have such a record because she was not born in a hospital.

Devastation is an understatement for how we felt. In our hearts and minds, Oscar was already ours. But the attorney was telling us that it was unlikely that our adoption would be approved and most likely he would be an orphaned child in a third world country.

We tried every resource reachable by man. Through family ties with connections at the United States Department of State, we were able to talk to a person at the US Embassy in Guatemala. The Embassy tried to do all they could to help us, including conducting a visual inspection of the orphanage. But that was about the extent of their influence.

I contacted different adoption attorneys in Guatemala to look into our case, which only managed to anger our initial attorney.

We contacted a local agency that did not-for-profit work in Guatemala.

We prayed, our friends prayed, everyone prayed.

Finally we took down the nursery and tried to accept the fact that Oscar would never make it to our home in the US.

I have never been so sad in my life.

Several months later we took a family camping trip. During some of the hardest times in our lives we have found hope, healing and renewal in the deep woods of a national park.

We were at a gorgeous, densely forested campground, on the Olympic Peninsula. I had accepted the fact that Oscar would not be coming home, but I still prayed for him everyday. I was standing on a log, praying. I remember the exact moment when I looked up at a tunnel of trees that pointed towards on opening of sky. I gave a little sigh, and out loud I prayed to God to “please bring Oscar home.” I had said this prayer many times before, but that moment was different. It was not until this prayer that I felt myself give the entire problem over to God. I remember the sense of my thoughts going straight up the tall trees and I felt total surrender. For the first time in months, I felt calm and peace in my heart.

We returned home from camping and the next morning at 7:00 am the phone rang. I was still sleeping so my husband answered. He handed me the phone telling me it was an urgent call. I was shocked to hear the voice of our attorney in Guatemala telling us our adoption was approved and we needed to come and pick up Oscar.

There have never been any clear answers as to why or how it was legally approved –the night before our attorney was at the courthouse working on another adoption and inquired again about ours. The government lawyers told him to wait out front as the courthouse was closing for the day. Moments later they open the doors and handed out our approved adoption case without further requirements or explanation.

Of course, we all know what really happened. I believe in my hearts of hearts that Oscar was always meant to be a part of the family. The love we have in our hearts for him was in no way changed by the circumstances of his adoption. The pain and anxiety we suffered waiting for him is only explainable as an explanation point on the message from God that he is The Gift to be cherished.