After spending the last few weeks painting, we moved into making some 3 D art. We started by looking at sculptures of the human figure.

I introduced the students to Alberto Giacometti, Swiss Sculptor and Painter.

Although he was a painter as well, Giacometti is most renowned for his expressive sculptures of the human figure following World War II.

Some view them as representing the isolation and loneliness following the war. As if the figures were turned in on themselves and failing to communicate with others, despite their overwhelming desire to reach out. Others see strength of humans in the frailty of the characters. Giacometti himself said he was not sculpting humans but rather “the shadow that they cast.”  I paint and sculpt to get a grip on reality… to protect myself. Alberto Giacometti

We looked at some of his sculptures and talked about how he exaggerated the arms and legs and how thin and flat the figures were. The students were surprised to find out that one of his sculptures recently sold for $104 million dollars, breaking the record for a work of art purchased at auction.

We also looked at human figurines sculpted by George Segal an American painter and sculptor associated with the Pop Art movement. 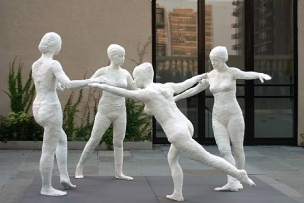 Segal pioneered the use of plaster bandages (plaster-impregnated gauze strips designed for making orthopedic casts) as a sculptural medium. In this process, he first wrapped a model with bandages in sections, then removed the hardened forms and put them back together with more plaster to form a hollow shell. These forms were not used as molds; the shell itself became the final sculpture, including the rough texture of the bandages. Segal’s figures had minimal color and detail, which gave them a ghostly, melancholic appearance.

We talked about the human body and proportions of head, chest, arms and legs, and how to accurately portray the human figure. Then we set to work creating our own figurines.

Creating our figurines is a multi-step process that began with thinking about different gestures and trying them out on our wood models.

The students then built the armature of the sculpture out of wire.

Once the structure was built, they wrapped it with foil. We talked about how this was like building the muscle of the body. 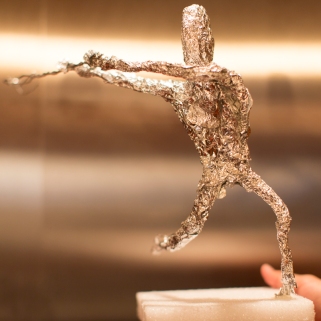 The next step was to add the skin to hold it all together. We did this by wrapping the sculpture in plaster of paris strips.

Finally we dressed our figurines with strips of cloth dipped in Paverpol.

Paverpol is the leading textile hardener and fiber sculpting medium in the world, and the only one awarded the AP non-toxic seal by the Arts and Creative Materials Institute (ACMI). It was created by a group of Dutch artists in the early 1990s as a user-friendly, environmentally friendly alternative to resin and is now used by artists and crafters in more than 20 countries around the world.

It was messy but a lot of fun to dress our figurines. 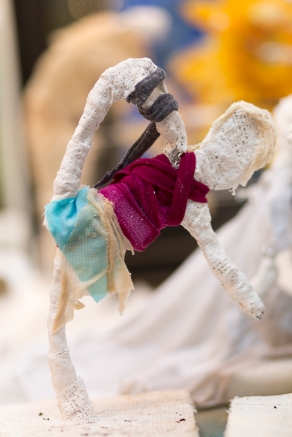 The final step is to paint the figurines all black and then add bronze or silver texture to make them look like metal sculptures. 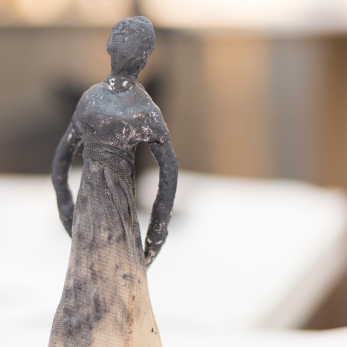 The Teen Class:  Students of all levels have enjoyed this project.  We modified the project to make it more challenging for the Teens who are creating larger figurines with more complicated positions and interest.  It has been really fun to see their individual personalities expressed through their sculptures.

They are really enjoying this project!  We should be wrapping this project up this week so look forward to your student bringing their creation home. Enjoy!

One thought on “Figurines”