We are learning about the artist Henri Rousseau at Picket Fence Art this week. In addition to being introduced to a new artist, we talked about how to use lines to create tone in a drawing, warm and cool colors and composition.

Line can be used to apply tone (light and shadow) to a drawing. This can be done by altering the:

There are many line techniques that can be used to create tone. Common techniques include:

The angle that these techniques are applied may remain constant within a drawing, or it may change in response to the angle and direction of the forms.

We read The Fantastic Jungles of Henri Rousseau by Michelle Markel.

Henri Rousseau did not start painting until he was 40 years old but he dreamed of becoming a famous artists. He worked during the day as a tollbooth operator and would paint in the evenings. He liked to paint the jungle even though he never visited one. Art critics did not like his self-taught style but other artist friends encouraged him to keep painting.   His paintings resemble storybook illustrations. His skills and art were not appreciated until after he died.

The students then drew their own jungles on watercolor paper.   Everyone was encouraged to start with one lion and to add as many other animals as they wanted. They then drew the dense jungle scene in the background. We filled in the jungle with various lines to create tone and texture. 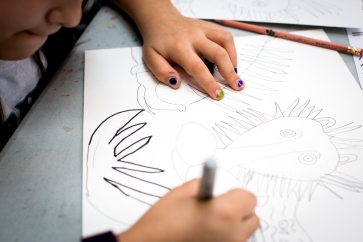 The drawings were outlined with Sharpie marker and painted with watercolor. The background is painted with cool colors to make it recede. 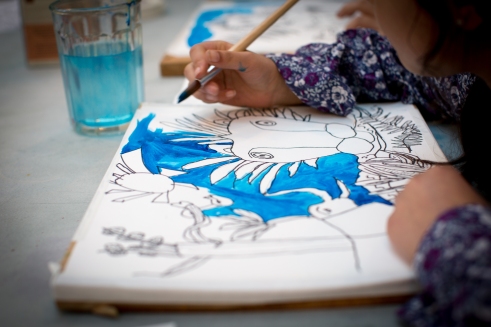 Next week we will paint the animals with warm colors to make them come forward.

Take It Home: Practice drawing by completing a mirror image of the lion and then draw in the jungle in the background. You can also check out this video about Henri Rousseau’s artwork on YouTube.

To celebrate fall, we will be making some leaf prints next week after we finish our Henri Rousseau’s Jungle paintings.  Feel free to send some leaves from your own yard and we will spend a few minutes collecting them around the studio as well.

As a reminder, there will be no classes the weeks of October 26th and November 2nd.

Thanks for sharing your student with me.

Processing…
Success! You're on the list.
Whoops! There was an error and we couldn't process your subscription. Please reload the page and try again.